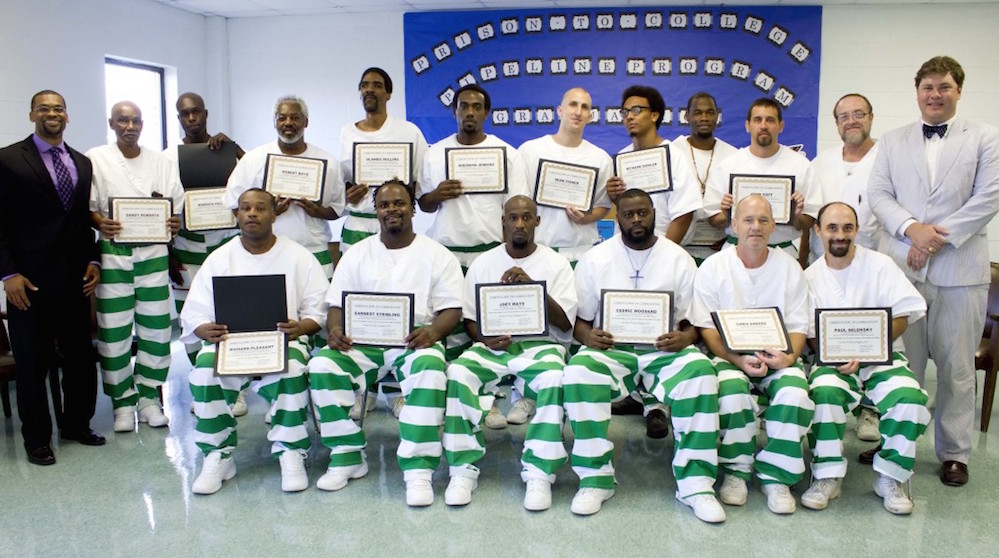 Several men imprisoned at the Mississippi State Penitentiary at Parchman are on their way to earning degrees, thanks to a new University of Mississippi-based program designed to assist them in obtaining a college education.

UM’s Prison-to-College Pipeline Program is a university-community engagement initiative promoting higher education in prison. Participants must have earned a GED or high school diploma to be eligible. Those who complete the course receive a certificate and the possibility of time off their sentences. Begun in summer 2014, the project already has yielded 34 graduates.

“We started the program because we love both learning and learners and we believe that meaningful learning happens everywhere—even behind prison walls,” said Patrick Alexander, UM assistant professor of English and African-American Studies and co-founder of the program.

“We both knew, through our prior research and teaching experiences, the profound role that student-centered prison education has played not only in reducing recidivism, but also in positively transforming isolated prison environments and the post-imprisonment outlooks and outcomes of imprisoned students,” Pickett said.

Alexander and Pickett credit Glenn Hopkins, dean emeritus of the UM College of Liberal Arts, with inspiring them to launch the program, known as PTCPP.

“Dean Hopkins made a point of emphasizing that he saw college-level and college-aspiring students at Parchman as part of our UM community during a 2012 faculty orientation we attended,” Alexander said. “Soon after we began teaching that fall, we heard from Dr. Linda Keena and Dr. Christopher Simmons, our UM colleagues who spearheaded the Ice House Entrepreneurship Program at Parchman. They shared how many of the men they’d met through that program were really interested in taking college-level courses.”

“‘Justice Everywhere’ met on Mondays for three hours from June to August 2014,” Pickett said. “We rigorously studied the speeches, writings and historical context that shaped the lives of Dr. Martin Luther King Jr., Fannie Lou Hamer and Barack Obama. An enhanced version of the course, which included more readings and writing assignments, was taught this past June through August.”

While their identities were kept anonymous, PTCPP graduates wrote evaluations about their experiences.

“I learned more in these 10 weeks than I did in my high school and college years,” one graduate wrote. “The great professors not only showed us a passion to teach, but also to learn about us and from us as they taught us valuable lessons.”

Another wrote, “This course was a great confidence booster heading back into society. It’s never too late to get an education and (there is) no limit to the things you can accomplish.”

Participants who completed the courses received their certificates during a graduation ceremony held at Parchman. Mississippi College was the first institution in the state to offer college credit for a PTCPP student. UM added several more for-credit learners this summer.

“In the months and years to come, we hope to expand the number and diversity of courses offered in the program in ways that reflect the wide range of educational goals and intellectual curiosities expressed by imprisoned students at Parchman and throughout the state of Mississippi,” Alexander said.

Seeing their students regain dignity and rediscover hope for their futures is one of the most rewarding aspects of the program, Pickett said.

“The work we do through PTCPP aims to unite university faculty and administration across disciplines and area institutions in the ethical-intellectual endeavor of teaching at the postsecondary level throughout the state prison system,” he said. “The PTCPP also aims to raise public consciousness on the impact of higher education on imprisoned populations regionally and nationally through the formal publication and public presentation of scholarly work on this topic.”

Alexander and Pickett presented their findings at a Southern studies brown bag lecture during fall 2014 semester and in papers presented at the 2015 Biennial Southern American Studies Association conference last February in Atlanta.

The PTCPP was funded by grants from the UM College of Liberal Arts both summers.

“We are extremely thankful for and humbled by their generosity and hope to receive the continued support of the college, the university at-large in years to come as the PTCPP expands,” Alexander said.
“This course exceeded my expectations in so many ways,” a proud graduate of the program wrote. “It should be offered every summer.”