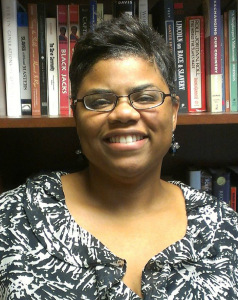 April 1, 2015 | By Tisha Coleman, courtesy of The Daily Mississippian

The tea was appropriate for the class, “The Power of O,” which focuses on billionaire Oprah Winfrey.

Winfrey, who was born in Mississippi, is an influential figure in many different areas. She is an actress, a movie and television producer, a philanthropist and an award-winning talk show host who owns a cable television network.

Garrett-Scott, assistant professor of history and African-American Studies, said that she created the course as a way to “look critically at various aspects of Oprah’s life, career and brand to contextualize her experience.”

“My goal is to share some of my ruminations about Oprah’s impact on American culture and contemporary black women,” said Garrett-Scott, who was the speaker at a brown-bag event in February entitled “‘Oprah Don’t Play!’: Black Women and the (A)Politics of Respectability in the 21st Century.”

“Though Oprah’s story is often told as a rags-to-riches tale of an exceptional individual who overcame incredible odds, she did not emerge out of a vacuum nor does she operate in one,” Garrett-Scott said. “I wanted to draw in considerations of politics and the economy — or, more to the point, money and power — in and beyond popular media.”

The objective of the “Power of O” course, according to the syllabus, is to pay close attention to race and representation, gender, sexuality, economics and politics to explore where power lies and how it operates. Eight students are enrolled in the seminar class.

Dyamone White, a senior majoring in integrated marketing communications, is a student in the class.

“There are so many misconceptions about Oprah and her life, but Dr. Scott has revealed with evidence some true facts that make Oprah seem so regular – just like us,” White said.

Parker Hill, a philosophy major and student in the course, said that her most enjoyable discussion was based on an article identifying Oprah as a de facto feminist.

“The author claimed that despite her accumulation of wealth, allowing her to speak as freely as she pleases, the negative connotations of being a feminist made Oprah disassociate herself from being one in name,” Hill said. “Ironically, her personal actions comply with the idea of a feminist by some definitions. Some agreed with the assessment, others did not, but it was still interesting to discuss.”

She continued on to say, “In some ways, these challenges are unique to our particular time and place. In others, they are persistent challenges in a society that continues to devalue blackness and womanness.”

Though Oprah is the focus of the course, “The Power of O” includes topics other than Oprah herself.

The class has also explored the history of representations of black woman in popular media.