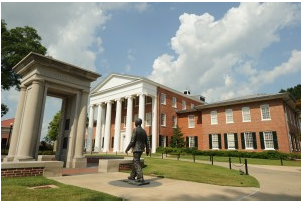 A monument honoring James Meredith, the first black student at the University of Mississippi. | Photo by UM Communications.

Three University of Mississippi sociology professors are launching a comprehensive study to understand racial and ethnic issues on campus and are seeking student participants to chronicle their experiences in online diaries.

Professors Kirk A. Johnson, Willa M. Johnson, and James Thomas are seeking volunteers to confidentially journal their experiences with race issues at UM. The identities of the students will be known only to the investigators. For now, the study is expected to last at least until the end of the school year, but the hope is to continue it through coming academic years.

“We’re casting a broad net, so all students are eligible to participate,” Kirk Johnson said. “We want to hear from undergraduate or graduate students, those taking classes on the main campus or satellite campuses and those from all races and ethnic groups as long as they have some sort of racial and ethnic experience to share.”

The professors will collect diary entries and then analyze them to see what sort of factors lead to everyday incidents of racial and ethnic tensions or conversely, racial and ethnic cooperation. The professors are still making arrangements for other universities to join the project, so for the time being, UM is the only school being studied.

Students who wish to enroll in the study can click this link. The link takes students to an online consent form, after which they’ll be directed to the diary website. There’s also a brief tutorial that explains how to write a diary entry.

Willa M. Johnson said the university is in a unique position to study the issue.

“We think that the University of Mississippi is well situated to discuss these things,” she said. “We think our history gives us an opportunity. Rather than just look at this as the grave problem that it truly is, we look at it from the perspective of the opportunity that it affords the University of Mississippi to both understand race and also to put scholarship out that explains prejudice, both where it comes from, how it’s expressed in all its iterations.”

Since the nation elected its first black president in 2008, many wonder if the country is “post-racial,” Willa Johnson said. She doesn’t believe that’s the case, but thinks the study can be a valuable look into how racial and ethnic dynamics work.

“We’re not post-racial, but where are we?” she added. “That’s what we’re trying to figure out.”

Professors who would like their students to participate in the diary project for extra credit should contact Kirk Johnson at kjohnson@olemiss.edu.