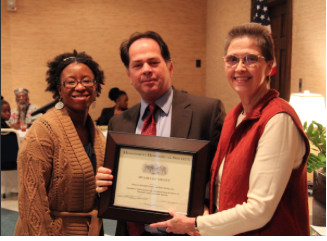 Jodi Skipper, assistant professor of anthropology and Southern Studies, received the Award of Merit to Preserve Marshall County & Holly Springs, Inc., from the Mississippi Historical Society at their annual meeting in Corinth on March 7th, 2015.

The award is presented to individuals or organizations for outstanding archival, historical, museum or records management work.

University of Mississippi archaeologists Jodi Skipper and Carolyn Freiwald began excavations at the Hugh Craft house in Holly Springs in November 2014 with a crew of Department of Sociology and Anthropology graduate and undergraduate students and the participation of Rust College students working with Dr. Alisea McLeod. Construction work on foundation of the 1850s mansion and detached kitchen building (that likely also served as the slave quarters) revealed evidence of consumption of whitetail deer, turkey, pig, and cow, as well as antebellum ceramics and other artifacts identified by homeowner and historian Chelius Carter.

Professors Skipper and Freiwald hoped to identify features associated with culinary practices of the time, as well as other household activities. The team identified features including a posthole, old piping, and a burned area in the yard. They returned in April 2015 to continue the investigation in conjunction with the Behind the Big House program (April 7th-12th) of tours of several extant slave dwellings and the Holly Springs Annual Pilgrimage Tour of Historic Homes and Churches.