Outside the Lines: African Americans and the Integration of the National Football League

By Charles K. Ross, associate professor of history and director of African American Studies at the University of Mississippi 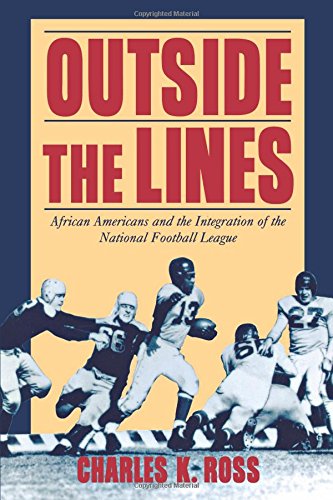 Outside the Lines, NYU Press (2001), traces how sports laid a foundation for social change long before the judicial system formally recognized the inequalities of racial separation. Integrating sports teams to include white and black athletes alike, the National Football League served as a microcosmic fishbowl of the highs and lows, the trials and triumphs, of racial integration.

Watching a football game on a Sunday evening, most sports fans do not realize the profound impact the National Football League had on the civil rights movement. Similarly, in a sport where seven out of ten players are black, few are fully aware of the history and contributions of their athletic forebears. Among the touchdowns and tackles lies a rich history of African American life and the struggle to achieve equal rights.

Although the Supreme Court did not reverse their 1896 decision of “separate but equal” in the Plessy v Ferguson case until more than fifty years later, sports laid a foundation for social change long before our judicial system formally recognized the inequalities of racial separation. Integrating sports teams to include white and black athletes alike, the National Football League served as a microcosmic fishbowl of the highs and lows, the trials and triumphs, of racial integration.

In this chronicle of black NFL athletes, Charles K. Ross has given us the story of the Jackie Robinsons of American football.

“Ross provides a concise account of the pioneers who integrated pro football in the early part of the century and those who helped reintegrate the game in the era of World War II. It is a heroic yet tragic story ably told. One hopes the book might convince the pro football establishment to honor some of these stalwart athletes and coaches by enshrining them in the Pro Football Hall of Fame.”
—John M. Carroll, Lamar University, author of Fritz Pollard: Pioneer in Racial Advancement and Red Grange and the Rise of Modern Football

“Charles Ross’ stellar research clearly demonstrates that the African American struggle for merit and equality not only extends to the playing field but has, in fact, long defined the game of professional football. A must read for students of the game, from casual gridiron enthusiasts to scholars alike.”
—C. Keith Harrison

“…offers an interesting recitation of the on-again-off-again participation of blacks in the early years of pro football.”
—The Baltimore Sun

“An important analysis for all who care about the African American experience in professional sports. Significant not only for the history it tells, but for the questions it raises about race relations in football as an industry and as a United States institution.”
—Michael E. Lomax