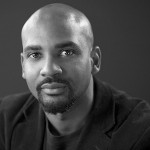 The newest exhibit at the University of Mississippi Museum is a collaboration of poetry and photography inspired by Langston Hughes’ award-winning poem “The Negro Speaks of Rivers,” and the museum is hosting a special reading Thursday (March 3) to celebrate it.

“Of Rivers: Photography by Young Suh, Poetry edited by Chiyuma Elliott and Katie Peterson” features 11 poems accompanied by photographs that interpret them. It runs through June 25 in the museum’s Lower Skipwith Gallery.

The museum is partnering with the Center for the Study of Southern Culture and its 23rd Oxford Conference for the Book, for a poetry reading at 3:30 p.m. Thursday (March 3) in the gallery. Many of the poets who contributed to “Of Rivers,” including Jericho Brown, Chiyuma Elliott, Derrick Harriell, assistant professor of English and African American Studies, and Katie Peterson, as well as photographer Young Suh, will participate in the reading, which is free and open to the public.

The reading will be followed by an opening reception from 4:30 to 6 p.m.

“Almost 100 years after it was written, Hughes’ ‘The Negro Speaks of Rivers’ still inspires writers to think about how to live and what to do,” said Rebecca Phillips, the museum’s coordinator for membership, exhibits and communication. “‘Of Rivers’ invites the viewer to be part of that conversation. It invites them to discover and contemplate – and hopefully also delight in – some of the new creative work that responds to this famous and important poem.

Suh, of Cerrito, California, was asked to visually respond to all the poems.

“What you experience in the gallery is the result of this collaboration: a literary and visual call and response,” Phillips said.

Because the artists featured in the exhibit can take for granted that readers and viewers know the relationship with the Hughes poem exists, some of their work foregoes explicit signals of connection, she said.

“Most of the poems and photographs have some things in common: they are specific, personal and idiosyncratic, not magisterial, or mythic or universal. These creative responses to Hughes focus on the unruly facts of the world. They are shape-shifting – sometimes autobiographical – narratives that begin with a big problem and tend to resist closure.”

The University Museum, at the intersection of University Avenue and Fifth Street, is open 10 a.m.-6 p.m. Tuesdays through Saturdays. For more information on upcoming exhibitions and events, visit http://museum.olemiss.edu and follow the museum on Facebook, Twitter and Instagram.