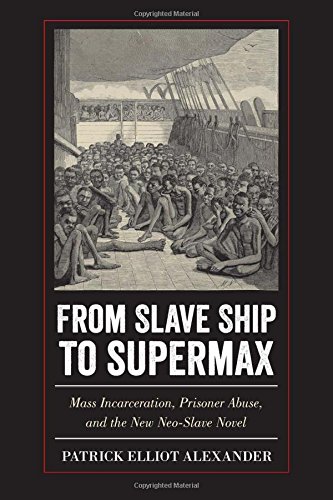 “Patrick Alexander adds to the canon of critical carceral studies with this evocative exploration of African American literature and prison narratives as intersectional discourses of power, resistance, and cultural revelation. From Slave Ship to Supermax connects enslavement and mass imprisonment as points that mirror each other, bookends of a continuum of state-sanctioned control over the black body. Alexander takes his readers into the prison classroom, complete with its terrors, its dreams, and its illuminations. This compelling and powerful work situates Alexander as a scholar and an activist.”
—Sheila Smith McKoy, Chair of the Department of English at Kennesaw State University, author of When Whites Riot: Writing Race and Violence in American and South African Cultures, and editor of The Elizabeth Keckley Reader, volumes 1 and 2

In his cogent and groundbreaking book, From Slave Ship to Supermax, Patrick Elliot Alexander argues that the disciplinary logic and violence of slavery haunt depictions of the contemporary U.S. prison in late twentieth-century Black fiction. Alexander links representations of prison life in James Baldwin’s novel If Beale Street Could Talk to his engagements with imprisoned intellectuals like George Jackson, who exposed historical continuities between slavery and mass incarceration. Likewise, Alexander reveals how Toni Morrison’s Beloved was informed by Angela Y. Davis’s jail writings on slavery-reminiscent practices in contemporary women’s facilities. Alexander also examines recurring associations between slave ships and prisons in Charles Johnson’s Middle Passage, and connects slavery’s logic of racialized premature death to scenes of death row imprisonment in Ernest Gaines’ A Lesson Before Dying.

Alexander ultimately makes the case that contemporary Black novelists depict racial terror as a centuries-spanning social control practice that structured carceral life on slave ships and slave plantations-and that mass-produces prisoners and prisoner abuse in post-Civil Rights America. These authors expand free society’s view of torment confronted and combated in the prison industrial complex, where discriminatory laws and the institutionalization of secrecy have reinstated slavery’s system of dehumanization.

“The haunting of social life by transatlantic slavery is never far from sight or sound in U.S. cultural life. In From Slave Ship to Supermax , Patrick Elliot Alexander traces the afterlife of black journeys across the Atlantic in and through the carceral state. Reading Baldwin, Morrison, Johnson, and Gaines, Alexander reminds us, with searing ethical commitment and intellectual acumen, that forgetting how we came to be here is both ill advised and dangerous. This book will spark a different kind of conversation about work on the prison-industrial complex.”
—Sharon Patricia Holland, Townsend Ludington Distinguished Term Professor of American Studies at the University of North Carolina, Chapel Hill, and author of The Erotic Life of Racism and Raising the Dead: Readings of Death and (Black) Subjectivity

“From Slave Ship to Supermax presents a highly accessible set of ideas to engage Black creative works beyond the literary realm. This work contributes a fresh perspective to the emerging discourses of U.S. and global carceral studies.”
—Dylan Rodríguez, Professor of Media and Cultural Studies at the University of California, Riverside, and author of Forced Passages: Imprisoned Radical Intellectuals and the U.S. Prison Regime and Suspended Apocalypse: White Supremacy, Genocide, and the Filipino Condition