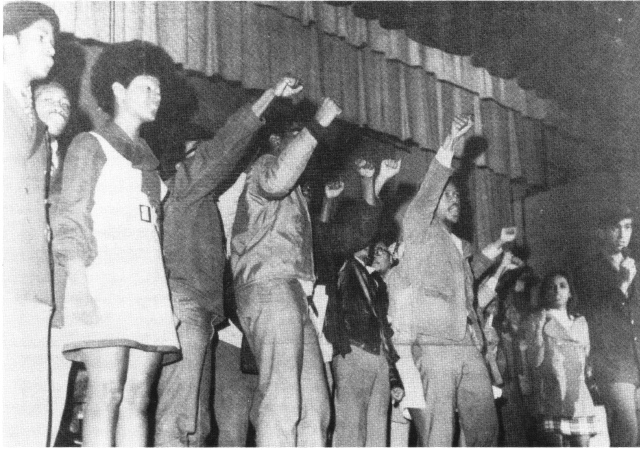 African American students at the University of Mississippi rally in 1970

PROTEST
Black students rallied for equal civil liberties at Fulton Chapel in 1970. Their 27 demands included a call for the establishment of an African American Studies department and the hiring of black professors and administrators.

DR. LUCIUS WILLIAMS JR.
In 1976, Dr. Lucius Williams became the first African-American to serve as a black administrator at the University. Dr. Williams held the position of Assistant to the Vice Chancellor for Academic Affairs for fourteen years. In 1991, the University dedicated the Lucius Williams Learning Center in his honor after he had served as its director for ten years.

PEGGIE GILLOM
Born in Abbeville, Mississippi, Peggie Gillom became the first African-American female basketball player at the University of Mississippi in 1976. Two years later, she became the first black female player from the university selected to an All-American team, and in 1980, she earned her B. S. in Social Work. From 1981 to 1997, she served as an assistant coach at the University and then served as an assistant coach for the Houston Comets before taking the position of Women’s Head Coach at Texas A&M from 1998 – 2003. In March of 2003, Gillom was named Associate Head Coach of the Women’s Basketball program at the University of Mississippi. The Gillom Sports Complex on campus is named in honor of Peggie and her sister, Jennifer.