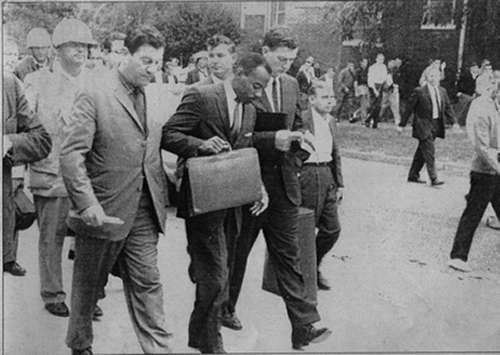 James Meredith at UM in 1962 | The Daily Mississippian photograph

JAMES MEREDITH
In 1962 James Meredith became the first African American to enroll at the University of Mississippi. During the 2002–2003 academic year, the university commemorated the 40th anniversary of Mr. Meredith’s integration of the school with year long celebration, Open Doors. In October 2012, UM commemorated the 50th anniversary. Visit the UM History of Integration website for more information.

TOUGALOO INCIDENT
On April 22, 1965, a professor and a racially mixed group of students from Tougaloo arrived at the University of Mississippi as delegates to the Southern Literary Festival. During the later part of the evening, a sizeable group gathered in front of the residence hall where the male Tougaloo delegates were housed. The crowd of students threw firecrackers, bottles, and rocks. The Tougaloo delegates staying in the male residence hall also had their vehicle damaged after a number of students had gathered near it. As a result of the incident, the university expelled two of the students involved, issued a suspended sentence to one individual, and several other students were referred to the Student Judicial Council.

Read an editorial on the Tougaloo incident in The Mississippian >>