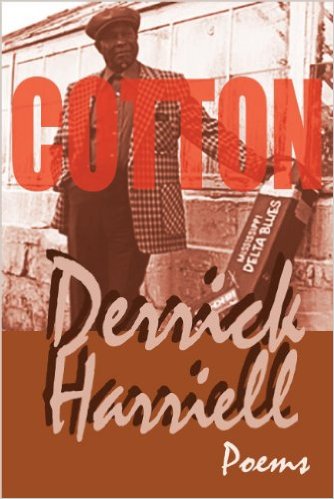 The first collection of poems by Derrick A. Harriell, assistant professor of English and African American Studies at the University of Mississippi, Cotton, was published by Aquarius Press/Willow Books in 2010.

“In his remarkable debut collection, Cotton, Derrick Harriell has created a mural in poems. The characters that inhabit this vivid tableau step into an active third dimension and allow us to witness the vicissitudes of their daily struggles, triumphs large and small, private desires. The community here is anchored by a specific Midwestern, African-American family which, in spite of both external and internal challenges, maintains its unity, however precarious at times. Death, passion, humor, mother wit, history, place, these are the colors that Harriell mixes and applies with such artistry that readers may not be so sure if they are watching a particular world or if that world is watching them. Harriell is among America’s most exciting new voices in poetry.”
—Maurice Kilwein Guevara

“All African Americans have a historic relationship with cotton. The southern United States was once the world s major supplier of cotton, King Cotton. It fueled the 19th Century s need for increasing the slave trade. The migrations of the freedmen could never put distance to that fact. Derrick Harriell s poems are the doors in the neighborhoods where they settled. The people of the streets, the houses, and the bars live in these poems. The personal family history of blues and redemptions are woven in the fabric, too. Both, noble and wicked traditions are revealed in a rich credible vernacular, a musical voice, like a storyteller sitting in your kitchen or on the barstool beside you testifying to the significant particulars, situations of poetic truths, the edgy full dimensions deep within the culture. Cotton is a stirring debut, and Derrick Harriell is a blues poet.”
—Gary Copeland Lilley, Author of The Subsequent Blues

Derrick Harriell was born and raised in Milwaukee, Wisconsin. He holds a Ph.D. from University of Wisconsin-Milwaukee and a MFA in Creative Writing from Chicago State University. He is an assistant professor of Creative Writing for the Department of English and African American Studies at the University of Mississippi. He formerly taught Creative Writing at UW-Milwaukee. He has presented in conferences such as the Idlewild Writers Conference and will present at Chicago State University in 2013. A former assistant poetry editor for Third World Press, Harriell served as poetry editor for The Cream City Review. A Pushcart Prize Nominee, Harriell’s poems have appeared in various literary journals and anthologies, including The Cream City Review, Reverie, the Lamplighter Review and Main Street Rag.