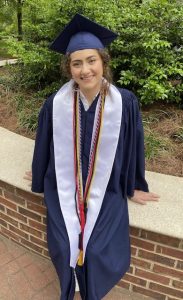 Hometown: Still River, MA
BA in African American Studies and English, minor in French (2021)
Brigitte Lewis won a prestigious national award – Portz Scholar – for her senior thesis project that uncovered the voice and stories of an enslaved and then free Black man named Neptune from her home state of Massachusetts. She used the African American Studies major to gain the tools and knowledge to research and tell his story. Brigitte is continuing this work while pursuing a master’s degree in history from the University of Chicago. The African American Studies degree prepares graduates for a wide range of graduate programs and careers.

She presented her honors thesis during the 56th NCHC conference in Orlando, Florida, winning $350 for her paper’s “unique originality” and “for the depth and breadth” of her research.

“It is nice to have my research recognized,” Lewis said. “(This award) exemplifies to me that this research can make a real impact.”

Lewis’ thesis, “The Legend of Neptune: A Portrait of Enslavement and Emancipation in 18th-Century Worcester County, Massachusetts,” uncovers the voice, history and stories of an enslaved and then free Black man named Neptune. The project uses an array of primary sources to construct a narrative chronicling Neptune’s life and experiences, supported by secondary historical research.

Lewis said that while growing up, she often heard the stories about Neptune, a man enslaved by the original owner of her 300-year-old childhood home. She began her research in high school, spurred on by a scholarship she received from the Harvard Historical Society.

“I joined the Honors College at UM specifically to write this undergraduate thesis and became an African American Studies major in order to gain the tools to adequately tell Neptune’s life and conduct this research,” she said.

According to Lewis’ research, Neptune was enslaved from 1742 to 1757 but found freedom sometime during or after the American Revolution. She learned that Neptune married and was a 20-year resident of Barre, Massachusetts, until his death in 1811.

Her project also chronicles the history of the land that enslaved Neptune, how Neptune arrived at Still River and the four moments that Neptune is mentioned in the historical record. She uses these histories to construct a larger narrative that gives a micro-historical look into the way slavery and freedom functioned in colonial and early rural New England.

Lewis ends her project by proposing avenues for further research and discussing the importance of raising erased histories.

Working on a master’s degree in history at the University of Chicago, Lewis is tracking the lives of a series of historical figures she found during her undergraduate research.

“I’m hoping to shed light on the relationships between the American Revolution, slavery, freedom and democracy in Massachusetts during the Revolutionary War period,” she said. “I have continued my undergraduate research into my graduate career and will continue it into a PhD. The final research at the end of my PhD. will become a book.”

“Winning such a prestigious and competitive award is a testament to the Honors College’s and university’s commitment to nurturing and developing talented, budding scholars,” said Garrett-Scott, who helped introduce Lewis to African American history over three courses. “Many students express excitement as they learn more about the rich African American past, but Brigitte went far beyond piqued interest.

“She expressed a deep intellectual curiosity and vibrant historical imagination, expressed not only in the complex questions she asked of the past but also in her deep engagement with the works and topics in the class. I wanted to encourage her interests.”

Lewis said she thinks her thesis would be of interest to other researchers because of its originality in subject, interrogation of primary sources and commitment to counter-narrative history.

“We nominated Brigitte’s thesis over those of her peers in the Sally McDonnell Barksdale Honors College because her project displays her passion for history, deep intellectual curiosity and independent research skills,” Scurlock said. “We are glad that the National Collegiate Honors Council also recognized the power of her work.

“Once again, our SMBHC scholars distinguish themselves not only on campus, but in the nation with their scholastic commitment and pursuit of knowledge and understanding.”