Passing Through a Porous Border 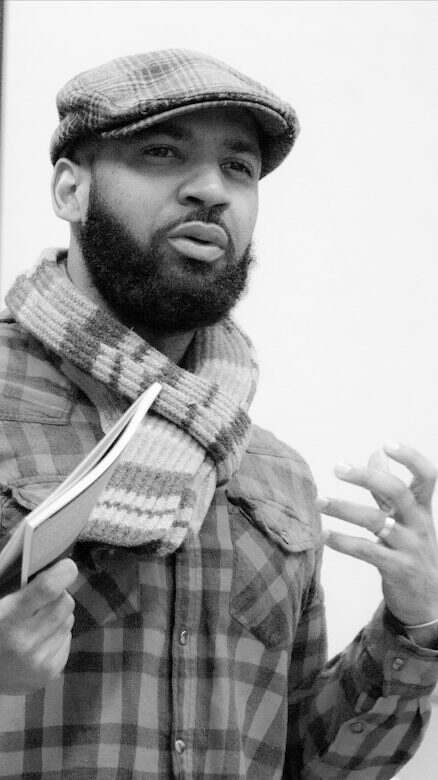 Prose and poetry are forged from the same raw material: words. But crossing from one genre into another can be precarious.

“The biggest obstacle for me in writing fiction was that I was used to being ambiguous and leaving things mysterious,” said Derrick Harriell, a highly-regarded poet and associate professor of English and African American studies.

“You can’t do that in short stories or novels. You have to keep a narrative moving—and not necessarily in poetic language.”

Harriell made his fictional debut last year with the short story, “There’s a Riot Goin’ On,” in Milwaukee Noir, an anthology in an award-winning series of noir writing, which casts a dark and existential light on human experience.

It was an auspicious beginning. The story was chosen for an Edgar Award by the Mystery Writers of America, the nation’s premiere organization for mystery and crime writers.

Named in honor of Edgar Allen Poe, literary icon and master of the macabre, the Edgars are regarded as of the most prestigious prizes in American fiction. Harriell is being honored with a special Edgar, the Robert L. Fish Memorial Award, given to first-time writers.

“There’s a Riot Goin’ On,” is set in Milwaukee, Harriell’s hometown, during the summer of (2016), when riots broke out after the acquittal of a police officer who had killed a 23-year-old black man after a traffic stop.

The story’s main character, Terrell, is a college student who had been out protesting on the eve of the narrative. A “shy person” in high school, Terrell is imbued with confidence after a night in the melee.

“. . . he felt liberated. . . as if he’d begun to discover some hidden continent within. An unexplored world that could only be found through the violence that occurs when a riot reaches the point of no return.”

But liberation comes at a cost. Terrell must choose between the thrill of the streets and the safety of domesticity, an evening at home, cooking with his mother and sometime girlfriend.

“I’d really been wanting to try my hand at a short story,” Harriell said. “Writing it took me three months, with a solid month of working with my editor. In my initial draft, Terrell had no name. I wanted him to be every young Milwaukee black man.”

Harriell is the author, too, of three poetry collections: Cotton (2010), Stripper in Wonderland, (2017) and Ropes (2013), winner of the Mississippi Institute of Arts and Letters Poetry Award in 2014.

In Ropes, the personas of black boxing legends Jack Johnson, Joe Louis, Joe Frazier and Mike Tyson speak to each other across generations. The volume is a tour of history through the eyes of these icons.

Creating a collection is its own art form, Harriell explains, dissimilar to writing singular pieces.

“It’s the difference between writing a song and creating an album. The poems have to be in conversation with each other.”

His poetry has twice been nominated for the Pushcart Award, an American literary prize that honors the best poetry, short fiction, and essays published in the small presses over the previous year.

“Dr. Harriell has become an indispensable pillar of the English department and the creative writing program,” said Ivo Kamps, chair and professor of English. “He’s an effective and popular teacher of creative writing classes and literature courses. We’ll all grateful for his presence and his immense contributions to the department.”

Among those contributions is amplifying male voices that often go unheard.

“My work is about black men and the communities and cultures surrounding them,” he said.