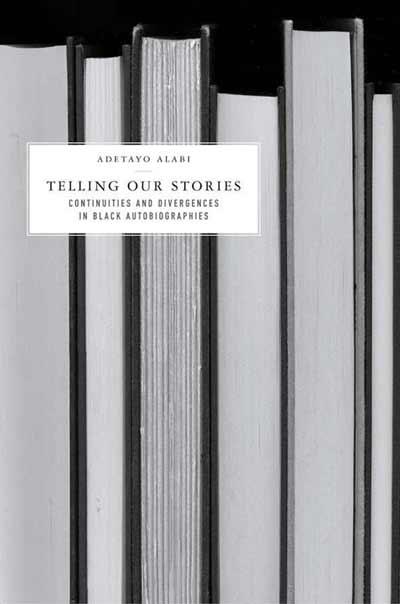 Telling Our Stories: Continuities and Divergences in Black Autobiographies by Adetayo Alabi, Palgrave/Macmillan, 2005.

Telling Our Stories (Palgrave/MacMillan, 2005) investigates the continuities and divergences in selected Black autobiographies from Africa, the Caribbean, and the United States. The stories of slaves, creative writers, and political activists are discussed both as texts produced by individuals who are products of specific societies and as interconnected books. The book identifies influences of environmental and cultural differences on the texts while it adopts cross-cultural and postcolonial reading approaches to examine the continuities and divergences in them.

“Black is the color of the autobiographies that Adetayo Alabi rereads in Telling Our Stories. Slaves, creative writers, and political activists, the self-conscious narrators in writing and through readers create communities and establish continuities – across both centuries and continents, from the African slave trade to the United States civil rights movement and the Caribbean ‘lionhearted gal.’ Alabi’s radical reactivation of autobiography as a genre of resistance and mobilization is a compelling inquiry into a critical past and on behalf of an even more crucial promise.”
—Barbara Harlow, The University of Texas at Austin

“Alabi’s book is a long overdue and most welcome addition to the scholarly library on ‘the African diaspora.’ A major distinguishing mark of this field of study is the exploration of the links between regional segments of the Black world, in terms of continuities and divergences in their recognition of their common racial backgrounds and histories. Alabi makes two other valuable contributions to this field: one, an inclusion of oral African texts in his discussion of the genre; and two, an especially welcome interrogation of the concept of ‘autobiography’ employed in Western discourses of the genre. Now I am finally ready to teach the course I have been planning for!”
—Isidore Okpewho, State University of New York, Binghamton

“The book offers a dexterous analysis of three fundamental terms of modern black self definition: individuality, communality, and resistance. Alabi teaches readers of black autobiography how tropes of individualism dwells in narratives of the collective.”
—Adélékè Adéèkò, University of Colorado, Boulder

“This book theorizes on testimonial narratives from both sides of the Atlantic. Race, class, and gender go “marching on” in this significant cross-cultural analysis. Telling Our Stories convenes a trans-Atlantic exegetical festival with familiar voices of modern griots such as Nelson Mandela, Wole Soyinka, Frederick Douglass, Maya Angelou, Malcolm X, and Derek Walcott. Shifting the focus of creative burden from self to community, and their interface, the p0testimonial narrative embodies the oral-written agency, signaling a celebration of both political resistance and innovation. With the publication of this substantial comparative work, Adetayo Alabi has dared to enter the often dreaded forest of a thousand critical dis-junctures—carefully synthesizing in order to illuminate our understanding of naming, place, and identity in African and African diasporan discourse and cultures.”
—Niyi Afolabi, University of Massachusetts-Amherst

“This is a solid contribution to Black autobiographical discourse. Its unique strength is in the bridge it builds between the African and the diasporan. It is a book that shows the autobiographical genre as central to understanding the life continuities, the survival, and the identity of the Black person in postimperial Africa and its diaspora. It is the work of a scholar whose knowledge of Black oral and written traditions and of contemporary western theories provides him formidable skills in handling the materials. It is a must read for teachers, students, and cultural theorists.”
—Abdul-Rasheed Na’Allah, Western Illinois University

Adetayo Alabi teaches Postcolonial and International Literatures at the University of Mississippi. He published entries in the Encyclopedia of Postcolonial Literatures and in The Companion to African Literatures. He has also published several chapters in books, including Ogoni’s Agonies: Ken Saro-Wiwa and the Crisis in Nigeria, The African Diaspora: African Origins and New World Identities, and Marvels of the African World: African Cultural Patrimony, New World Connections, and Identities; and in journals like Liwuram, African Literature Today, and In-Between.