Race and Sport: The Struggle for Equality On and Off the Field 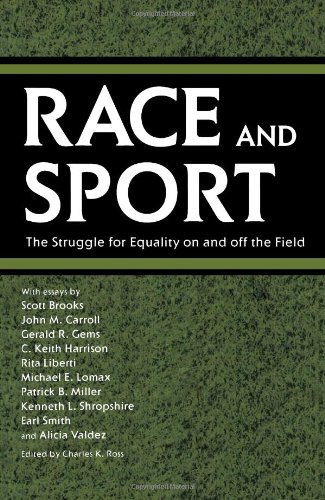 Race and Sport
The Struggle for Equality on and off the Field, Edited by Charles K. Ross

Edited by Charles K. Ross, director of African American Studies and professor of history at the University of Mississippi, this anthology from the University Press of Mississippi (2006) is an examination of the connection between race and sport in America with essays by John M. Carroll, Gerald R. Gems, Rita Liberti, Michael E. Lomax, Patrick B. Miller, Kenneth Shrophsire and Scott Brooks.

Even before the desegregation of the military and public education and before blacks had full legal access to voting, racial barriers had begun to fall in American sports. This collection of essays shows that for many African Americans it was the world of athletics that first opened an avenue to equality and democratic involvement.

Among the early notables discussed is Fritz Pollard, an African American who played professional football before the National Football League established a controversial color barrier. Another, the boxer Sugar Ray Robinson, exemplifies the black American athlete as an international celebrity. African American women also played an important role in bringing down the barriers, especially in the early development of women’s basketball. In baseball, both African American and Hispanic players faced down obstacles and entered the sports mainstream after World War II. One essay discusses the international spread of American imperialism through sport. Another shows how mass media images of African American athletes continue to shape public perceptions.

Although each of these six essays explores a different facet of sports in America, together they comprise an analytical examination of African American society’s tumultuous struggle for full participation both on and off the athletic field.

Professor Ross is the author of Outside the Lines: African Americans and the Integration of the National Football League.